The article I wrote on tackling Universal Studios Florida is live on Gluten-Free Living magazine’s website! Yay! Find it here, including all the ups and downs.

Share this with ANYONE that is in the realm of theme parks and needs a strict gluten-free diet. And if you really want the full recap – skip to the end and read the last few paragraphs. Thanks so much!

So we jumped on the theme park bus again; after a 2 year reprieve from Disney. Universal Studios Orlando for a bit of muggling fun. Here’s a rundown of the #sogood and the not #sogood!

Did you catch that last one? Yep definitely two different worlds on that one. I thought you all may find it interesting what I received from Universal when I emailed their corporate dietary email. I was pretty shocked at what I got in return. See below. . .

“Hi, in Universal Studios, we have fruit stands in the parks with apples, oranges, grapes, watermelon on them. Also have lemon and strawberry slush carts which will be ok, also have turkey legs on carts that are just smoke plain. We have a full service unit it is Lombard’s landing and Finnegan’s, we have a chef in each unit have the server bring the chef to the table and he can go over all the things he can do for you In Islands of Adventure we have 2 full service units one called Confisco’s and one is Mytho’s, we have Chefs in both of those units, have server bring Chef to table and he can go over the things he can do for you. We have another walk up unit it is Thunder Falls, we have smoke chicken, smoke ribs, and roasted corn on cob and roasted potatoes with fresh herbs and salt and pepper, also have French fries all natural cooked in soy blend oil that is the only thing cooked in those fryers too.  I will also say no desserts at all from any of the restaurants too.

We also offer gluten free pasta in the full service restaurants in both parks and at café four and at louies italian, there is a Ben and Jerry’s Ice cream shop in USF that has gluten free ice cream. We also have three broomsticks which have smoked chicken and smoked pork ribs, roasted corn on cob, baked potatoes, roasted potatoes with onions, garlic, salt and pepper, and fresh herbs and some salads too.

At leaky there is a vegetable platter no bread and a chicken sandwich on a gluten free bun. There is gluten free pancakes at all the breakfasts, bacon, eggs, fruit, sausage yougart

If you need any more information or help feel free to give me a call at 321-388-2123, Chef Bob. The restaurants in citywalk will be able to help you with your allergy all units have 4 chefs in them.

They can make you gluten free pasta and a non- breaded chicken breast at the character dinner. The fudge is made on property in our bakery on shared equipment.”

Wouldn’t a nicely laid out spreadsheet work a bit better for this information?!

Let’s compare this to Disney’s website page, https://disneyworld.disney.go.com/guest-services/special-dietary-requests/, that addresses so much more info. Disney then sends you specifics on what each restaurant offers for your particular allergens/intolerances.

Regardless, I made my list of restaurants I thought would be best and here’s my experiences.

This is a lively place at Universal’s City Walk. Antojito’s is a very large restaurant with live mariachi bands and lots of chips and margaritas. I called ahead for this reservation and asked for a manager but that was lost in communication during our seating. My order went in late due to the manager being delayed in getting out to see our table. I chose shrimp tacos on corn tortillas and roasted plantains.

Their menu does have gluten-free items noted. I didn’t feel great the next day. After thinking about the plantains, they may have been flash fried and since their tortilla chips weren’t safe I am guessing the fryer was contaminated. Either that or the tortillas were warmed on a shared surface? Hard to know. It was the first night there and I think I was too excited to ask all the right questions. Not a perfect start. On the upside everyone else really liked their food!

Our first day at the parks we were looking for a quick service stop. This Café had pizza, ribs and turkey legs. I spoke with the manager and had read that the turkey legs were safe from the Universal Dining sheet. I asked him to pull the leg and steamed plain broccoli from the back of the restaurant and he was happy to do so.

It was actually really good and I shared it with my oldest and hubby. It was huge! NOTHING on the menus was marked GF. This really went for EVERYWHERE in the park, aside from the higher end restaurants menu (Mythos). No GF marked on anything. It was the first day and I was already longing to jump across Orlando and go to Disney instead!

This spot seemed intriguing for our larger group. Burger and sushi aficionados combined. We stopped the day before to make the reservation and the manager chatted with me at length about their procedures and I was impressed. I was really hoping to score a mini burger and sushi combo but their burger buns have dairy.  I was trying ot keep my system in check so I was avoiding it. Boo. So I ordered some of their basic sushi options.

This is pretty Americanized sushi here. They served it with a sauce that once I questioned it, it was quickly swiped from my plate. Must not have been safe. The sushi was just okay. Nothing to write much about, but it is a cool atmosphere and I feel like they did execute the meal well. The burgers got good reviews from the rest of the group. 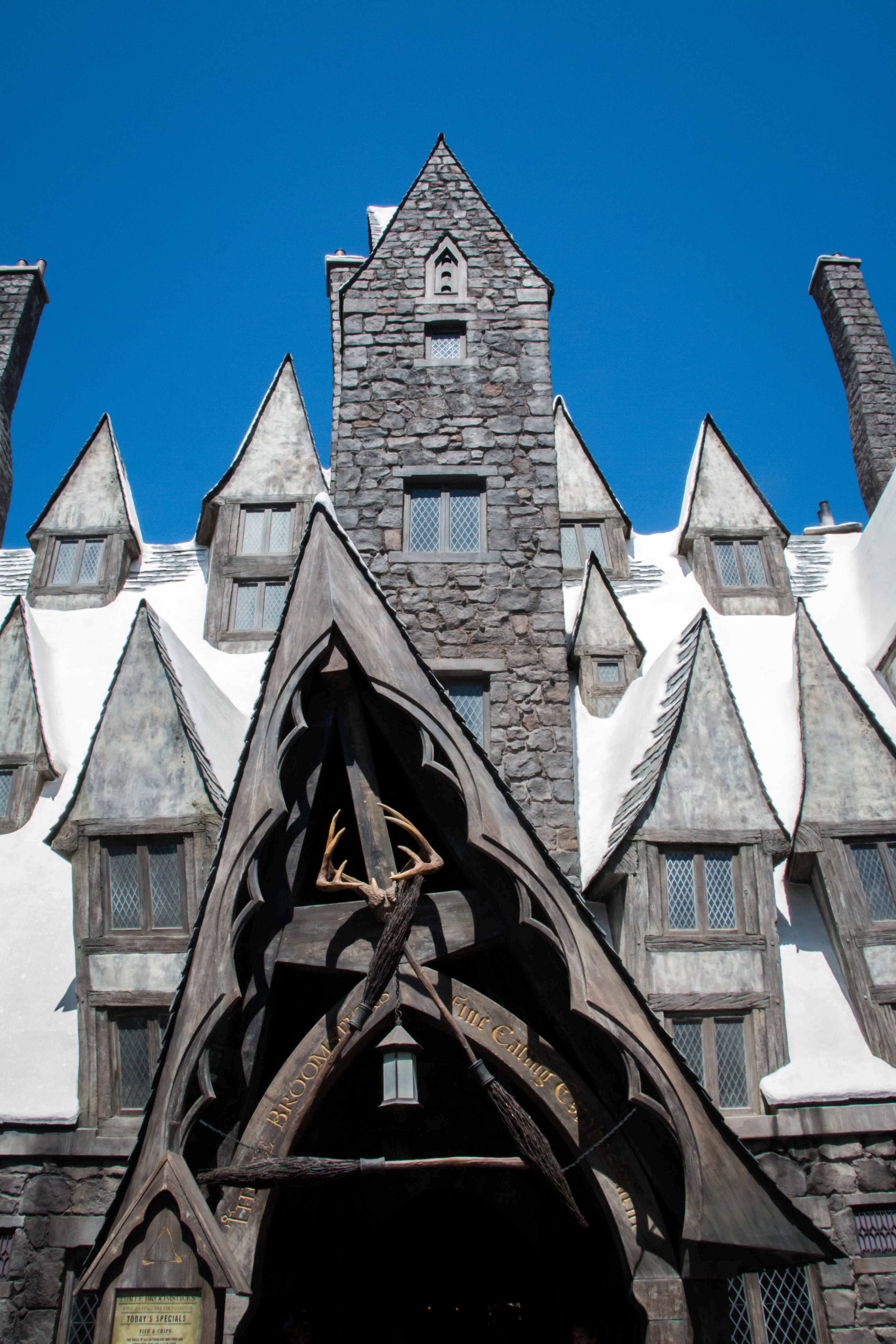 My girls are Harry Potter fanatics, thus our trip here in the first place. So we had to stop at the Three Broomsticks for a quick lunch our 2ndday at the parks.  Three Broomsticks serves fairly simple food, roasted chicken, ribs, shepherds pie. There didn’t appear to be a significant amount of contamination risk coming here. I chose the rotisserie smoked chicken salad. The hubs went for ribs and the kids for fish and chips and mac and cheese.

Again, using the resource sent to me from the dietary service and a brief chat with the manager on duty, I made my selection. Also again, nothing on the boards was notated for allergens.  The manager did take my order but my food was delivered on the same tray with everyone else’s food.  The salad was fine. Nothing special, which is pretty much what the whole family said about the meal. You pay for the experience here; the food isn’t the star.

This quaint ice cream shop in the heart of Dragon Alley was a huge hit. All soft serve ice creams were gluten-free, we tried Butterbeer (of course!) and pistachio.  The information sent from Universal did say the hard pack ice cream was not safe, just the soft serve. We did also try the Butterbeer! It is gluten-free (not dairy free). Unfortunately between the 5 of us we couldn’t even finish it! So sweet!

This may have been the meal that put my system over the edge. Mama Della’s was recommended by the Loew’s Portofino staff as the most accommodating menu for a celiac needing gluten-free food. The menu was far from kid friendly, the prices were high and there was pasta everywhere. On the menu and off the menu.

I went for custom dish, asking for a shrimp salad. It was mediocre at best. The salad was drowning in oil and had an odd flavor. I ate the shrimp and left the rest. I had a bad feeling from the start of the meal, the way the server and manager handled my requests and I was even more annoyed when we got the bill and they charged me for the full price shrimp entrée instead of a salad with added shrimp. $34 for a shrimp salad seemed outrageous.

The next day I felt awful. I contacted hotel management and tried to meet with them twice in the hotel lobby. It never worked for them to be accessible when we had the time.  We played phone tag for a few days. He wanted to follow a health protocol with me. No offer of real action to discount our pricey meal that ended up causing a downward spiral that made the end of our trip extremely difficult for me to manage. I didn’t have the energy to keep calling and attempt to reach them. I left voicemails that never got returned.

Mythos – Islands of Adventure – B+

This themed restaurant within Universal’s Islands of Adventure Park definitely had the most gluten-free reviews out there. They won “Best Theme Park Restaurant” from 2003-2009 and they still proudly display that signage.

The inside of the restaurant is built to look like you are immersed in Greek mythology, with waterfalls, rock carvings and even a replica of the River Styx running through the restaurant. It was quiet the evening we were there as we snuck in at the end of the day. Definitely try to make a reservation as they do book up, we walked in about 20 minutes before closing and they were kind enough to accommodate us.

At this point in the trip, being our last night, I was already not feeling well. Too much exposure for sure and one poorly handled meal had sent my system over the edge. I ordered the simplest item on the menu, the beef medallions with herb roasted fingerling potatoes, corn succotash, herb salad and chimmichurri. It was delicious and the rest of my crew loved their food as well.

We really liked the ambience of the restaurant and the kids loved watching The Incredible Hulk roller coaster go over and over again. A great win, just wished I could have enjoyed the meal more without the worry of feeling more sick the next day.

I was hopeful, I read and researched. I joined the gluten-free Orlando Facebook group, posted and read responses. And I had a plan for the restaurants.  I reached out to the dining management for the theme park and hotel. Even the best-laid plans fail.

At the end of this trip I was struggling and it was a struggle that lasted weeks. It changed my perspective on being able to travel and trust restaurants to accommodate me.

I didn’t want to write about it because it cumulated in such an awful response. I don’t want this blog to be negative.

But I also want people to be educated and know how this sort of trip can end up being such a struggle. If I was going to do this trip again we would need to stay in a condo with a kitchen so I could tote along my own meals to the park. As easy and accommodating as Disney is regarding allergens, Universal was not.

This site uses Akismet to reduce spam. Learn how your comment data is processed.